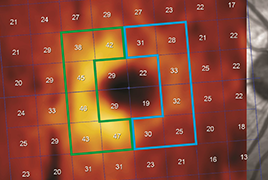 The Use of Optical Coherence Tomography in Chiasmal Compression

Published in Czech and Slovak Ophtalmology: 2019 - 3

The objective of this prospective study is to explore the benefits of optical coherence tomography (OCT) in cases of optic chiasm (OC) compression by measuring the thickness of the Retinal Nerve Fiber Layer (RNFL) and the Ganglion Cell Layer (GCL).

Material and methods: 16 patients (32 eyes) with chiasmal compression were included in the study. They presented no other pathology of the visual pathway or of the eye globe. The second inclusion criterion was a subsequent indication of decompressive surgery, either by transcranial or transnasal approach. Measurements of visual acuity, visual field, RNFL and GCL were performed once preoperatively and three times postoperatively (one week, 3 and 6 months postoperatively). The observed peripapillary and perifoveal regions were divided into quadrants. The degree (grade 0-5) of chiasmal compression was determined on preoperative brain MRI (magnetic resonance imaging). In
need of some data analysis, participants were split into a group with no or minimal (grade 0–1) and with substantial pressure (grade 2–4) on OC.

Results: The median global peripapillary RNFL was 87 μm, the perifoveal nasal GCL 41,2 μm and the temporal 44,2 μm. There was a pronounced preoperative RNFL thinning in nasal (63,5 μm) and temporal (65 μm) quadrant, in comparison to the age-matched normative database for RNFL thickness in the OCT protocol. There is a statistically important connection between bitemporal hemianopia and RNFL, resp. GCL. Larger perimetric outages is related to important OC compression, seen on MRI.

Conclusion: There exists a correlation between the thickness of the peripapillary RNFL, resp. perifoveal GCL, and visual field defects in chiasmal compression. Thinner preoperative RNFL does not present a statistically important limiting factor for better functional outcomes after surgical decompression. Horizontal asymmetry of perifoveal GCL is an indicator of compressive ophthalmopathy. The grade of preoperative OC compression presents another important prognostic factor.