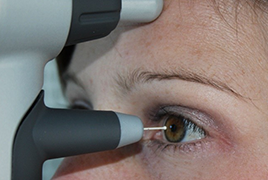 Published in Czech and Slovak Ophtalmology: 2019 - 3

Aim: To compare intraocular pressure readings (IOP) measured by ICARE PRO and ORA G3 and analyse the influence of the corneal hysteresis (CH), central corneal thickness (CCT), average central corneal radius, corneal astigmatism and age on the readings. In addition, to compare the repeatability of measurement by both tonometers.
Methods: The data was collected by IOP measurements in both eyes in 40 individuals between ages of 41 and 86 years. The number of 74 eyes (70 eyes in the case of ORA repeatability) were included to the study, remaining eyes were excluded due to incomplete data, abnormal cornea or low quality of measurement. The subjects were all diagnosed for glaucoma or were suspected of having glaucoma. In the case of ORA tonometer, the Goldmann-correlated IOP (IOPG) and corneal compensated IOP (IOPCC) were monitored. The CH was measured by ORA, CCT by ultrasound pachymeter and corneal curvature and astigmatism by autokeratometer. The effect of corneal parameters and age on IOP or on differences between tonometers were analysed by multiple linear regression. The comparison of readings from both tonometers and repeatability analysis (based on test-retest) were realised using a paired t-test and a Bland-Altman method. The level of statistical significance was set to 0.05.
Results: The IOP readings from both tonometers were positively correlated with CCT and negatively with CH. The effects of other monitored parameters were insignificant. The mean ICARE PRO reading did not differ significantly from IOPG but were significantly lower than IOPCC. The variability of differences was, however, high in both cases and differences were influenced by IOP and CH (ICARE PRO shown higher readings with decreasing IOP and increasing hysteresis). The lowest repeatability coefficient shown ICARE PRO, the worst IOPCC (3.0 mmHg for ICARE PRO, 3.8 mmHg for IOPG and 4.8 mmHg for IOPCC).
Conclusion: The IOP values measured by both considered tonometers are significantly influenced by corneal hysteresis and central thickness. The effect of CCT can arise from an effect of a corneal stiffness. Regarding the high variability of mutual differences, the data from ICARE PRO and ORA are not interchangeable. The repeatability of ICARE PRO was comparable with Goldmann applanation tonometer measurement under given conditions, and better than ORA.