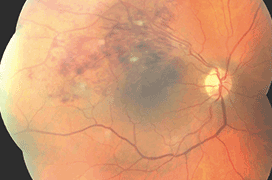 Published in Czech and Slovak Ophtalmology: 2019 - 4

Purpose: To retrospectively evaluate the efficacy and safety of ranibizumab treatment for macular edema (ME) secondary to branch retina vein occlusion
(BRVO) after 24 months.

Materials and Methods: This study included 39 eyes of 39 patients with ME associated with BRVO treated at the Ophthalmology Department of Faculty Hospital in Hradec Kralove. The average age of included patiens was 69,3 years, the mean duration of symptoms before treament was 5,4 months, the mean baseline visual acuity (VA) was 54,6 ETDRS (Early Treatment Diabetic Retinopathy Study) letters, the mean baseline central retinal thickness (CRT) was 544,9 μm. At 64,1% patients a retinal laserphotocoagulation was performed before intravitreal ranibizumab. After one year, the study was discontinued by 17 patiens, the remaining 22 patients were observed for 24 months. Initially, there were 3 doses of intravitreal ranibizumab administered in monthly intervals, further injections were applied according to PRN (pro re nata) regiment. Patients were examined at baseline and then at 3, 6, 9, 12 and 24 months from initiation of the treatment. In this study, the effect of ranibizumab on functional and morphological parameters of the affected eye was monitored, the safety of this treatment was also evaluated. During the follow-up, a statistically significant improvement in VA was
achieved in every visit in comparison to baseline parameters, the mean VA gain at the 3 month visit was 12,1 ETDRS letters (p < 0,001), at 6 months 12,5 letters (p < 0,001), at 9 months 10,5 letters (p < 0,001), at 12 months 12,5 (p < 0,001), at 24 months 8,6 letters (p < 0,05). There was a statistically significant decrease in CRT as well in the 3, 6, 9, 12 and 24 months visits, namely 249,0 μm (p < 0,001), 185,2 μm (p < 0,001), 187,0 μm (p < 0,001), 214,8 μm (p < 0,001) and 205,2 μm (p < 0,001). The average number of doses administered to a patient was 4,9 within 12 months and 7,1 within 24 months. The treatment had greater effect in younger patients with shorter duration of symptoms and baseline VA of less than 55 ETDRS letters (6/24 or worse. Nor serious, neighter long-term adverse events occured, only occasional intraocular pressure
elevation after intravitreal application was found.

Conclusion: Our results from common clinical practice are consistent with the results of large clinial trials, we confirmed particularly good treatment efficacy in younger patients with shorter duration of macular edema and poorer baseline visual acuity. The safety of ranibizumab treatment was
confirmed.