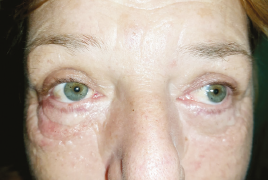 Published in Czech and Slovak Ophtalmology: 2021 - 2

Methods: The study took place from April 2018 to April 2020 at the Military University Hospital in Prague. The operation was performed by two surgeons. The study included 43 eyes of 33 patients (17 women and 16 men), average age was 79 years. Before the operation, 23 eyes had an ectropion and 20 eyes had an entropion, 35 of 43 were cases of involutional origin. The study does not include patients who underwent other surgical techniques.

Results: There were no intraoperative or postoperative complications in the entropion surgery group. Proper correction was achieved, and bothersome symptoms disappeared in 91,3 % of cases. Correct position of eyelid was not achieved in two cases. For patients with ectropion, surgical correction was successful in 95 % of cases. The ectropion persisted after surgery only for one patient.

Conclusion: The lateral tarsal strip technique is safe, reliable and highly effective surgical technique. Correction of eyelid malposition was achieved in more than 90 % of cases. Vast majority of patients were satisfied and reported relief from preoperative symptoms.