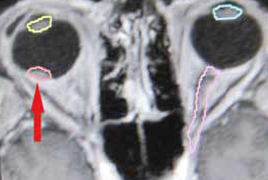 Introduction: Nowadays radiotherapy is the standard treatment care for patients with uveal melanoma. In Slovakia the only one option is a one-day session stereotactic radiosurgery at linear accelerator LINAC. Irradiation of surrounding tissues of the eye and orbit causes radiation complications. One of the most serious and vision-threatening is the radiation retinopathy, which divides into maculopathy and peripheric retinopathy. The clinical signs include microanerysms, teleangiectases, hard exsudates, cotton wool spots and macular edema, neovascularisation, and vitreous hemorrhage. Radiation macular edema can be classified by optical coherence tomography into cystoid or noncystoid edema. On fluorescein angiography macular edema is divided into non-ischemic and ischemic, while the latter means usually irreversible loss of the visual acuity. This paper is focused on risk factors of radiation retinopathy although it strongly influences functional result of radiotherapy and preservation of the visual acuity.

Purpose: By means of bivariate and multivariate analysis to determine the association of radiation dose and other variables with the development of radiation maculopathy.

Material and methods: The retrospective analysis of 168 patients with ciliary body or choroidal melanoma who performed one-day session stereotactic radiosurgery on a linear accelerator LINAC in a period 2007–2016.